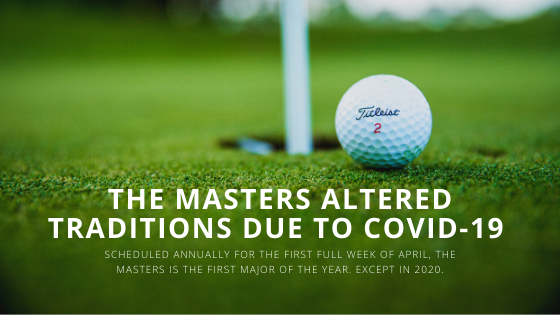 The Masters Altered Traditions Due to COVID-19

Scheduled annually for the first full week of April, the Masters is the first major of the year. Except in 2020.

On March 13th, Fred Ridley, Chairman of Augusta National Golf Club, told the sports world that the Masters Tournament, the Augusta National Women’s Amateur and the Drive, Chip and Putt National Finals would be postponed.

Then on April 6th, just a few days before the 2020 Masters was originally scheduled to begin, Ridley announced that Augusta National Golf Club had identified November 9-15 as the intended dates to host the 2020 Masters.

Why is the Masters So Special?

Well, it starts because the tournament’s co-founder – Bobby Jones – was one of the greatest golfers of all time. In addition, unlike many other tournaments, the Masters takes place at the same location every year:  Augusta National Golf Club in Georgia.  Other major golf tournaments, the Super Bowl, the World Series, the Olympics, etc. happen at various courses and stadiums.  A consistent golf tournament location allows for consistent tournament traditions.

Golf as a whole is a sport steeped in tradition.  Golf as we know it originated in Scotland in the fifteenth century, when then Scottish king James IV began playing golf in 1502.  And the British Open, begun in 1860, is the oldest of the four major tournaments in professional golf.  It is the Masters, however, that holds some of the most interesting and talked-about traditions.

Traditions at The Masters

Golfers, fans, and TV cameras return to Augusta every year to partake in the Masters traditions.  So, what are these traditions?

A firm recognition of tradition begins with The Champions Dinner.  Before the tournament each year, past Masters champions gather for a banquet, with the menu chosen by the previous year’s winner.  This elite group of winners even gets its own locker room, the Champions Locker Room.  The rest of the professional golfers in the tournament use one locker room, but past Champions get to use their own special locker room, which features nameplates on lockers of past golf greats and Masters memorabilia.

Masters traditions even extend to activities on the golf course that take place before the tournament itself.  The semi-social Par 3 tournament provides a lighter side to the competition, with children often caddying for their fathers, along with significant fan interaction.

In addition, there is the tradition of skipping balls at the 16th hole during practice rounds.  After hitting the ball from the tee toward the hole, golfers walk to the waters’ edge and try to “skip” shots across the water and onto the green.  The fans encourage the players, offering friendly cheers and jeers, depending on whether the skip shot reaches the green on the other side or plops into the pond.

Tradition often rests on ceremony, and the tournament itself always begins with a ceremonial opening tee shot.  In line with the firm tradition of honoring past champions, legends of golf, like Jack Nicklaus, Gary Player and Arnold Palmer, for example, gather at the first tee, where their first tee shots announce the beginning of the tournament.

Of course there is nothing like a uniform to emphasize tradition.  As with other golf tournaments, players use their own caddies, and they are often dressed in clothes from corporate sponsors.  At the Masters, however, these caddies wear special uniforms, including a white jumpsuit, Masters cap, and white shoes. No sponsors.

One final tradition weds the recognition of past champions, the ceremonies, and the uniforms:  The Green Jacket.  After the tournament, the previous year’s winner presents the new champion with The Green Jacket.  Champions keep their jackets for a year, then return them to storage at Augusta National, where the individual champion can wear it again, but only on club grounds. The new Masters Tournament champion then gets to be a part of the tradition reserved for past champions.  And the fans can return to the same traditions the following year.

The Masters Tournament is, let’s face it, a commercial event.  Wealthy professional athletes participate in a highly publicized event, televised for millions to see, taking place on the finely manicured grounds of a very exclusive club.  On the other hand, we each have our own traditions, less formal than the Masters traditions but more important.

Many of our personal traditions originate in and continue with our families.  Traditions strengthen a family bond and offer comfort and security, especially for children.

Unlike the Masters Tournament, family traditions do not stand on ceremony, require a consistent location or uniform, or feature a choreographed celebration of past “champions”.  While Uncle Jon might be “all-time quarterback” every year at the family-reunion football game, the game continues even if he sits out for a while.  Kids wear a motley array of jerseys, sweatshirts, and jackets.  Nobody remembers who won, but everyone has fun.  Many of us remember these types of family traditions from childhood and pass them on to our own children.

Make A Tradition With Your Financial Professional

The formal part is that you’re dealing with money that is allocated in certain specific ways.  Other formalities, on the other hand, have passed away.  Financial professionals have gotten away from stuffy traditions like always a suit or only meeting in an office.

Great financial professionals carry on the most important tradition, which involves asking the right questions, listening, assisting clients with their dreams, and charting a course designed to support the family and be passed on to the children.

It is important to establish a tradition of yearly review of your financial plan with your financial professional.  Not only are you considering the formal matters of finance, like returns, moves in the financial indexes, and proper allocation of your investments, but you are also discussing your plans for your family and the best ways that you can serve them.

And having won a Green Jacket is not required.

The opinions voiced in this material are for general information only and are not intended to provide specific advice or recommendations for any individual.

Investing involves risks including possible loss of principal. No investment strategy or risk management technique can guarantee return or eliminate risk in all market environments.

This article was prepared by RSW Publishing.